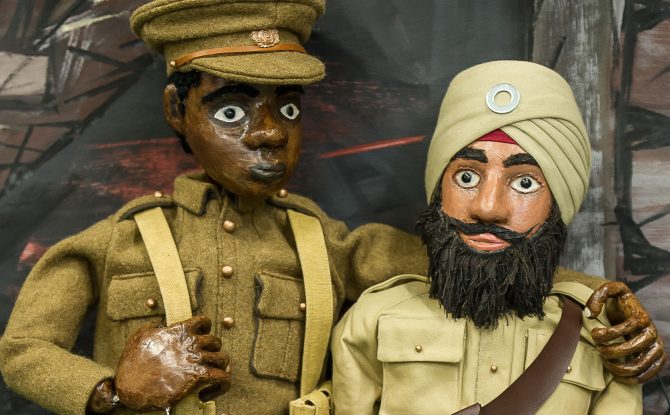 Tickets are available through the BRIGHTON DOME and cost £12.

A new music theatre work commemorating the contributions of ethnic minority soldiers during the First World War through music, theatre and puppetry, bringing to life their hopes and fears, their longing for home, their camaraderie, courage and valour.

Directed by Clare Whistler and Freya Wynn-Jones to Neil Irish’s designs, it features over 250 children from local primary schools in Brighton, Newhaven, Lewes and Seaford alongside acclaimed jazz vocalist of the year and MOBO nominated Cleveland Watkiss and ‘superb’ (The Times) opera singer Damian Thantrey.

This powerful centenary event is made all the more poignant by its location in Brighton Dome, which served as an Indian Military Hospital during the war.

The Trench Brothers Exhibition will be at Newhaven Fort from 4 August to 5 November offering a creative response to the untold stories of ethnic minority soldiers in the First World War. For more information on the interactive exhibition, please see our EXHIBITION PAGE.

Trench Brothers was created with support from Heritage Lottery Fund.

Trench Brothers visits the National Memorial Arboretum as part of the Lichfield Festival!

The Trench Brothers performance is a culmination of a project with local primary schools in which students explore the contributions of ethnic minority soldiers in the First World War though a series of workshops including artefacts handling, a visit from an Indian Army costumed interpreter, a composition session to set their Letters Home from a given soldier to music and puppet making to create their own force of Trench Brothers puppets. Their learning is supported by the Trench Brothers Education Zone offering contextual information and 90 lesson plans and activities linked to the curriculum

Trench Brothers also has a temporary exhibition at the NMA which is also FREE to visit – for more information please see our EXHIBITION PAGE.