20. The Aftermath of War

There were large numbers of soldiers who returned to Britain after the war and needed work. They saw ethnic minorities as stealing jobs and houses that they thought should belong to white British workers. This caused dissatisfaction among Britain’s workers, particularly seamen, and led to the outbreak of rioting between white and ethnic minority workers in Britain’s major seaports from January to August 1919. The worst outbreak was in Liverpool. During the months of racial violence, white crowds attacked ethnic minority workers, their families and communities, resulting in 5 deaths, and vandalisation of their homes and properties. Very few of the thousands of white people who took part in the mobs were arrested.

One story that stands out from these riots is that of Charles Wooten, a black 24-year old ship’s fireman. In an effort to find the perpetrators of an attack on some men the previous night, police raided boarding houses used by black seamen. The seamen dug in and defended themselves with weapons. Several policemen were injured. A lynch mob formed, and as Charles ran from one of the raided houses, he was chased by 2 policemen and an angry crowd of 2-300 people. The police caught him at the edge of the dock, but the mob grabbed him and hurled him into the dock where he was pelted with rocks. He died in the water. No arrests were made.

As a result, there was chaos. The streets were full of rioters, and on the 8th June, 3 West Africans were stabbed in the street. On the 9th and 10th several thousand young men in organised mobs went around savagely attacking any black man they could find, and setting fire to houses occupied by black people.

Read about Ernest Marke, who was caught up in the riots

The Social Impact of World War 1

Between 1914 and 1918, around two million women replaced men in employment – an increase from 24% to 37% of women working. The result of this was that it opened up a wider range of occupations to women, and also helped to speed up the collapse of traditional women’s employment, particularly domestic service. The middle classes still wanted servants, but those who might previously have gone into service were attracted by other job opportunities, particularly in clerical work, bus-driving and the civil service. It was not an easy transition, though. After the war, many women, particularly those who were married, were expected to go back to their traditional role in the home, and there was a lot of fear from returning servicemen that women were taking ‘their’ jobs. The war also caused an increase in lobbying by the suffragists, and in 1917, women over the age of 30 were awarded the vote.  Ironically, this did not include most of the women whose war work was so admired.

For men, it was a different story. Many of those who came back from the front line were physically devastated – more than 41,000 of them had their limbs amputated during the war. They were often unable to take back jobs they had had before the war, and unemployment and retraining was a problem. There was also an imbalance in the population, as so many young men were killed. Many communities were completely devastated. In one school, girls were told that only 10% of them could be expected to find a partner. It took Britain a long time to readjust to the upheaval.

After the war, blood red poppies were the only plants to grow on the otherwise barren battlefields. The poppy quickly became a lasting memorial to those who died in WW1 and later conflicts, inspired also by Canadian John MacCrae’s poem ‘In Flander’s Fields’. It was adopted by the Royal British Legion in 1921 as the symbol for their annual fundraising Poppy Appeal, which supports all current and former military personnel. In 1922, the ‘Poppy Factory’ was established in the UK to employ disabled ex-servicemen to make the poppies. Last year’s appeal raised £37 million.

What we celebrate now as Remembrance day was known as Armistice day until after The Second World War. It is celebrated in many Commonwealth countries (former colonies in the British Empire), and is designed to remember the members of their armed forces who have died in the line of duty. Most countries include either one or two minutes of silence at 11.00 on the 11th day of November (the 11th Month). Many countries also include a sounding of the Last Post to start the silence, followed by the sounding of The Rouse (often mistakenly referred to as Reveille). The Last Post was the bugle call at the end of the military day, and The Rouse was the first call in the morning. In addition, wreaths are laid at war Memorials. This tradition comes from Ancient Greece and Rome, where wreaths signalled high honours, and in many countries they are also laid at Cenotaphs as part of memorial rituals – in Britain, this is in Whitehall. 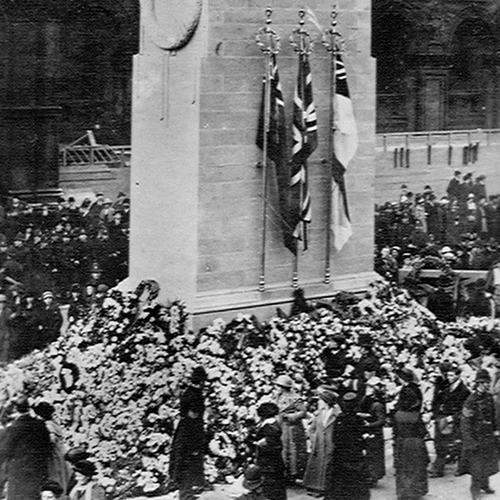 Thousands of war memorials were erected to pay tribute to those involved in the conflict. These ranged from civic memorials, national monuments, war cemeteries (particularly in France and Belgium) and private memorials. Many listed names of those lost in battle, whilst Tombs of the Unknown Soldier were dedicated to those whose fate was unknown. Many battlefields and cemeteries can be visited today – the UK government have funded a visit by 2 children from every Secondary school to commemorate the Centenary. In 1917 the Commonwealth War Graves Commission was established (as the Imperial War Graves Commission) to record and construct cemeteries for those who were registered as having no known grave.

Memorials commemorating Indian troops who fought and fell in the Great War are to be found in Belgium, China (Hong Kong), Egypt, England, France, Germany, Greece, India, Iran, Iraq, Kenya, Lebanon, Palestine, Romania, Somalia, Syria, Tanzania and Turkey. The most famous in Europe were the Indian Memorial in Neuve Chapelle in France and the Chattri in Brighton, both of which were opened in 1921.

A decade later, the British Government in India unveiled the Delhi Memorial (India Gate). Designed by Sir Edwin Lutyens and originally known as the All India War Memorial, it commemorates the soldiers of Indian Army who lost their lives while fighting as British allies in the First World War and the Third Anglo-Afghan War of 1919. It commemorates by name 13,300 Commonwealth servicemen and also acts as a national memorial to all the 70,000 soldiers of Undivided India who served and died in every main theatre of operations (except Italy) during the First World War.