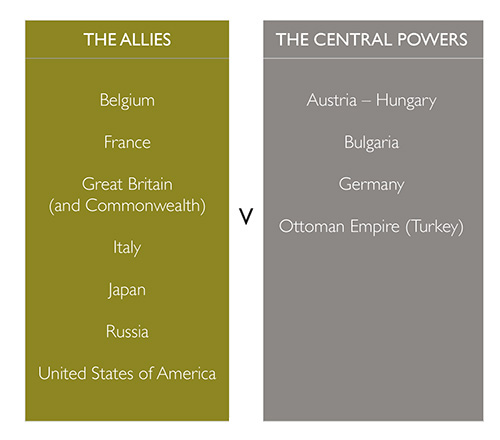 The reason for so many countries becoming involved with Great War, despite the fact that it started as a dispute between Austria-Hungary and Serbia, was the pattern of alliances the countries were in. Pre-war Europe was essentially dominated by two armed camps: The Central Powers, of Austria-Hungary and Germany, and the Entente Alliance (which became known as the Allies), created in 1894 between Russia and France, based upon fears of growing German power.

Great Britain joined the side of the Allies in the late 1890s once it realised Germany was serious about building a navy to rival Britain’s, and made alliances with both Russia and France. However, Britain’s reason for entering the war was in fact the invasion of neutral Belgium, with whom it had an agreement from 1839 to protect it in the event of war.

Japan entered the war in August 1914 on the side of the Allies, honouring a military agreement with Britain.

Italy was originally allied to Germany and Austria-Hungary, but initially avoided entering the war by saying that it was only bound to these countries in the case of a ‘defensive’ war, and declared a policy of neutrality. Italy entered the war in May 1915, on the side of the Allies, and against her two former allies.

The USA, under President Woodrow Wilson, declared a policy of absolute neutrality, which lasted until 1917, when Germany’s policy of unrestricted submarine warfare seriously threatened America’s commercial shipping across the Atlantic. It never formally joined the Allies, and chose instead to wage war against the Central Powers on an independent basis as an Associated Power.

Belgium was originally neutral, but refused to allow German troops passage through it, and so had to defend itself when Germany invaded. However, its army was tiny and it was soon occupied by Germany for the duration of the war. 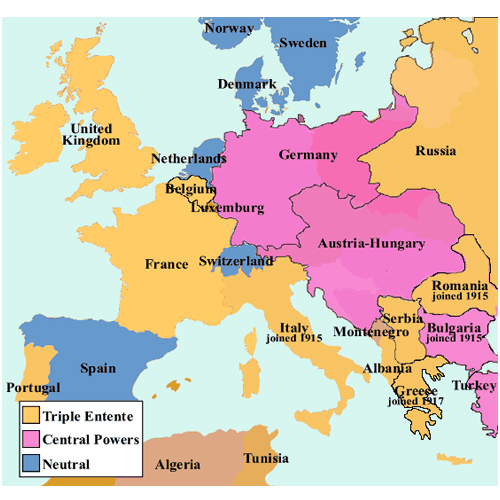 Europe in 1914
© The National Archives