India’s contribution to the First World War is not widely known about, despite the fact that it raised the world’s largest volunteer army. At the outbreak of the War in August 1914, the Indian Army mustered 194,000 regular soldiers and 46,000 non-combatants, giving a total of 250,000 personnel. By Armistice in November 1918, the force had grown to nearly 1.5 million, with a million serving as soldiers.  Incredibly, one in every six soldiers of the British Empire was from the Indian subcontinent; its contribution was the equivalent of all the ‘white’ forces from the rest of the British Empire combined (namely Canada, Australia, New Zealand and South Africa).

Indian units were composed of soldiers from various ethnic groups or classes, with different religions and customs. The main groups were Sikhs, Jats, Punjabi Muslims, Punjabi Hindus, Brahmins, Rajputs and Gurkhas (see below).  The ethnic/religious groups tended to be kept together in battalions so that you had the 1st Gurkha Rifles, the Sikh Light Infantry, the Jat regiment, and so on. The Indian Army fought in all the major theatres of war on land, air and sea, alongside British troops. It was led by white British officers, who had made their careers in the Indian army, with Indian officers under them. 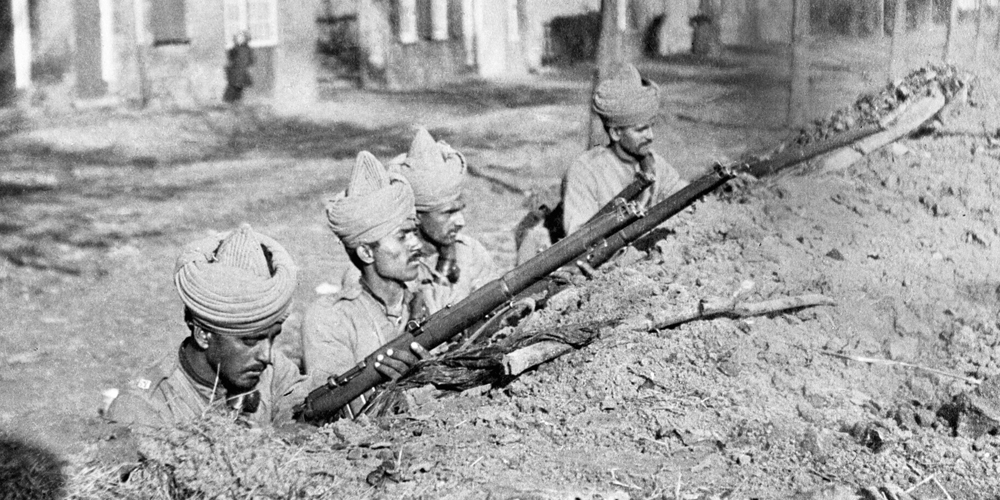 Indian Amy soldiers were in action on the Western Front within a month of the start of the war. The Indian Corps can be credited with having saved the front line from collapse. A total of 140,000 men, comprising 90,000 combatants (those in the front-line) and 50,000 non-combatants (those in auxiliary battalions), saw active service on the Western Front in France and Belgium. They were particularly important in the battles of Ypres and Neuve Chapelle.

After a year of front-line duty, sickness and casualties had reduced the Indian Corps to the point where it had to be withdrawn. Nearly 700,000 then served in the Middle East, fighting with great distinction against the Ottoman Empire in the Mesopotamian theatre of war. Indian Army troops also served in Aden, Egypt, Palestine, Persia, Italy, Salonica, Russia, East and West Africa, on the Gallipoli peninsula and even in China. 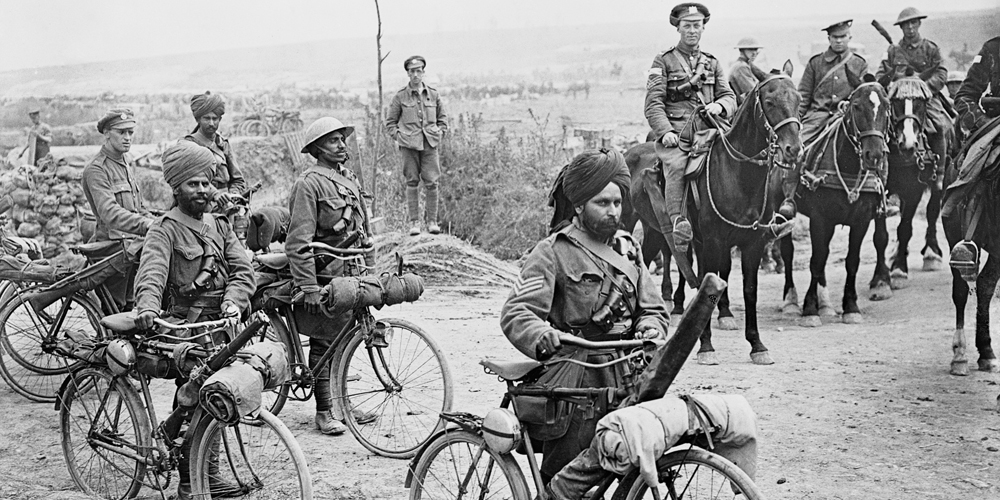 Gurkhas were the foremost of the so-called ‘martial races’, which also included the Jats, Hindu farmers from the Punjab, and the Pathans, Muslims from the tribal regions of present-day Afghanistan and Pakistan.

Gurkhas, Jats and Pathans were thought to be martial races because they were considered to be naturally warlike and aggressive in battle, to possess qualities of courage, loyalty, self-sufficiency, physical strength, resilience and orderliness, to be able to work hard for long periods of time, and to fight with tenacity and military strength.

Gurkhas hailed from the independent country of Nepal. Their name derives from the Hindu warrior-saint Guru Gorakhnath, who was supposed to have first set foot on the earth in Nepal. Gurkhas are closely associated with the Khukuri, a forward-curving Nepalese knife and have a well known reputation for their fearless military prowess.  Around 100,000 fought with the Indian Army in the First World War.