The Brown Bomber is a jazz dance suite by composer Julian Joseph commissioned for the Cultural Olympiad as a celebration of sportsmanship and achievement. Based on the heroic sporting battle between American boxer Joe Louis, the first African American to become a national hero, and German boxer Max Schmeling in 1938, it brings to life through music, the connection between two athletes once adversaries in sport, whose friendship endured, despite the ideological opposition by which they were both surrounded. It focuses on their mental battle inside the ring and celebrates their Olympic values of true sportsmanship, through friendship and mutual respect.

Created to inspire young people with behavioural issues or at risk of exclusion, the project combines boxing and dance training with resources linking thematic and historical material to the curriculum. In 2012, the new dance suite choregraphed by Sheron Wray, was premiered by professional dancers Bless Klepcharek, Jason Poullard and Ishimwe Cobbey together with students from local schools and the Julian Joseph Sextet at the Lilian Baylis Studio, Sadlers Wells and the Southbank Centre.

Having initially been developed with and for The Pedro Club, Bridge Academy and The Boxing Academy, the project subsequently ran in several schools and PRUs across the country offering boxing training (James Cooke MBE and Julius Francis), dance training (Ann-Marie Lennon and Paradigmz) and performances. 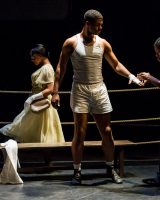 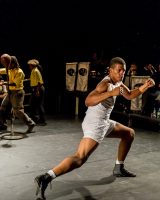 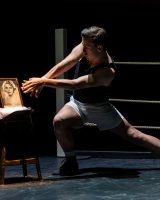 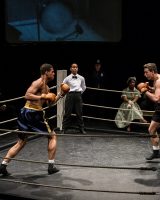 The Brown Bomber was part of New Music 20×12, a UK-wide commissioning programme initiated by Jilian Barker and David Cohen and delivered by PRS fo Music Foundation in partnership with the BBC, LOCOG, Sound and Music and NMC Recordings.